In 2016 we wrote an article about rules and regulations for specific industries in China. The industry focus of China is constantly changing and in 2017 a new version of the Foreign Investment Catalogue of the Chinese government was published.  Therefore, we want to update our original article to a 2018 version.

One of the first things a company needs to know before setting up their WFOE in China, is whether their business scope has any restrictions or is only allowed under special permits and regulations. The business scope of a company describes which activities will be performed by the entity in China. These are specified before having set up and need to be approved by the Chinese government. There are some business areas which have restrictions laid upon them. Above all, there are industries which are outright prohibited for non-Chinese companies, as a result you cannot set up a WFOE in these industries. In this article we would like to inform you about the encouraged, restricted and prohibited industries in China.

What are encouraged, restricted and prohibited industries in China?

Since 1995, the Ministry of Commerce (also known as the MOFCOM) of China has regularly published the Foreign Investment Catalogue. The latest iteration of the catalogue was in 2017 and shows which changes are happening in China. The catalogue is divided in 3 sectors:

For Encouraged Industries, one can think of research and development of technology. Since China’s goal is to change from a manufacturing focused country to also have products developed in China, developing R&D in China is a huge focus. Furthermore, besides a focus on R&D, companies willing to start producing in China are still encouraged, since the infrastructure is already in place.

Restricted industries in China include foreign investment in Chinese High Schools, Pre-Schools and Tertiary Education. Since many Western recent graduates start as English teachers in China, setting up a school might seem like a good way of improving their career. First of all, the restriction means that the institution which provides the education must be in a joint venture with a Chinese party. Furthermore, the school’s headmaster or chief administrator must be a Chinese national as well. Lastly, the Chinese party should account for at least half of the members of the board of directors. In layman terms, this means that a school cannot be set-up by foreigners alone and a Chinese partner must be found.

An example for a prohibited industry is the operation of antique stores and auction houses selling Chinese cultural relics. While this might seem logical that China wants to keep their sales of cultural relics in their own hands, there are other prohibited industries which might be more unexpected. Construction of golf courses and villa’s is an example of an industry which is prohibited in China as well, although one could have thought this would be legal.

In the table below you can find an overview of the current encouraged, restricted and prohibited industries in China: 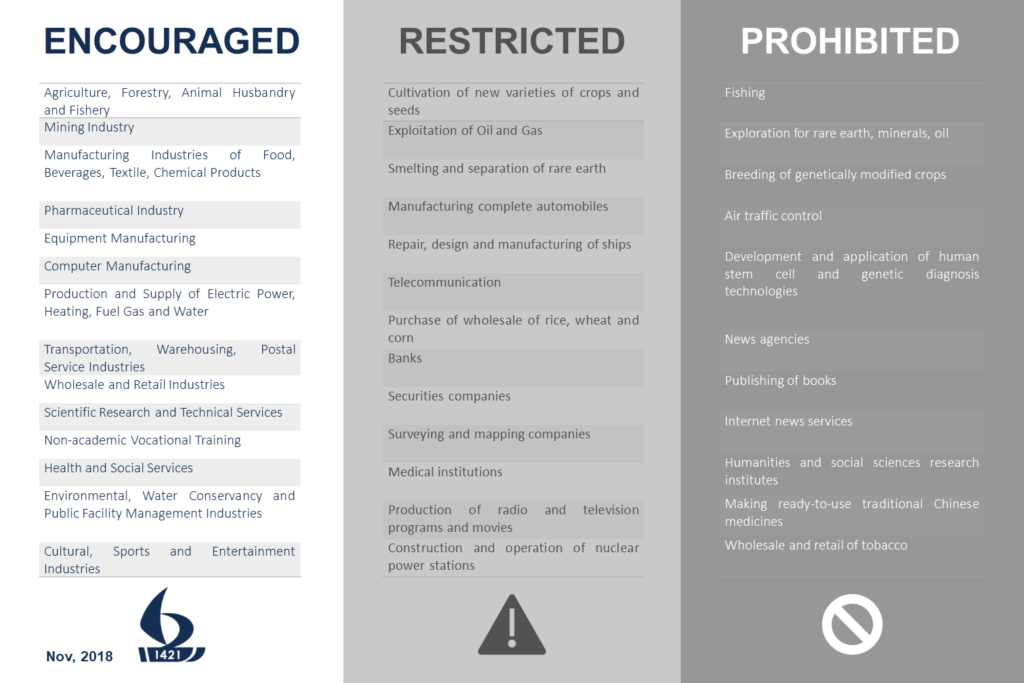 Because the list of encouraged, restricted and prohibited industries in China is quite extensive and subject to revisions, we want give you the direct hyperlink. Our message to you is to check whether your industry is on this list. If it is not on there, for now the industry is “deemed as allowed”. With every version of the catalogue, one can see where opportunities and challenges lie in China.

Furthermore, if you want more information about setting up a WFOE in China, please read our white paper on this topic. You can request it here.