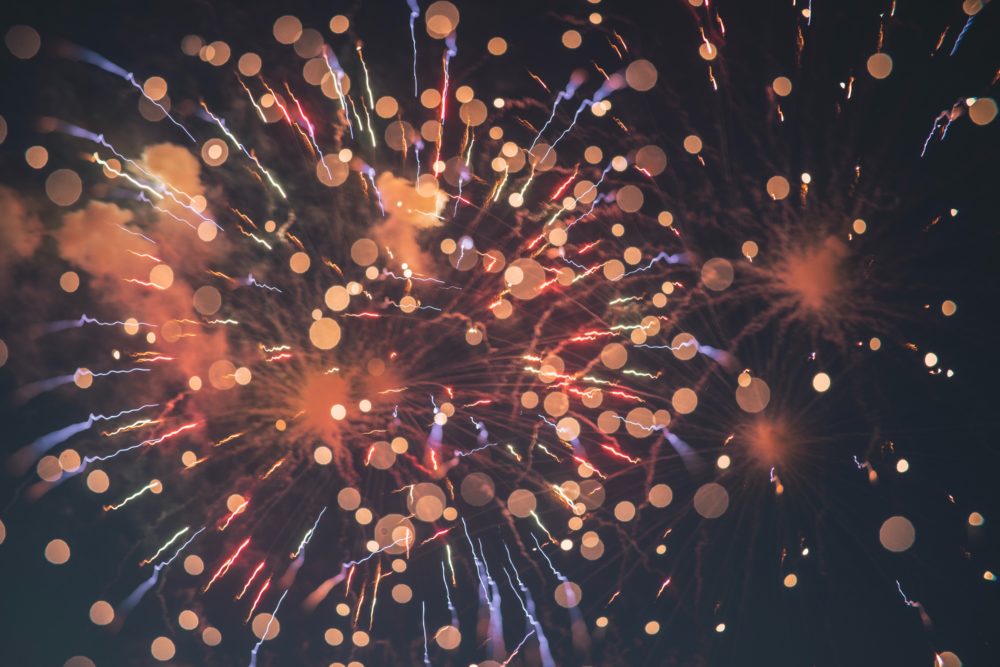 Now that the Western holiday season is over, it is a perfect moment to inform you about when the Chinese public holidays in 2019 are, and the reasons behind them. During public holidays in China everyone has time off and most offices will be closed. It is important to keep these dates in mind when doing business in and with China, since communication and productivity will be slow. 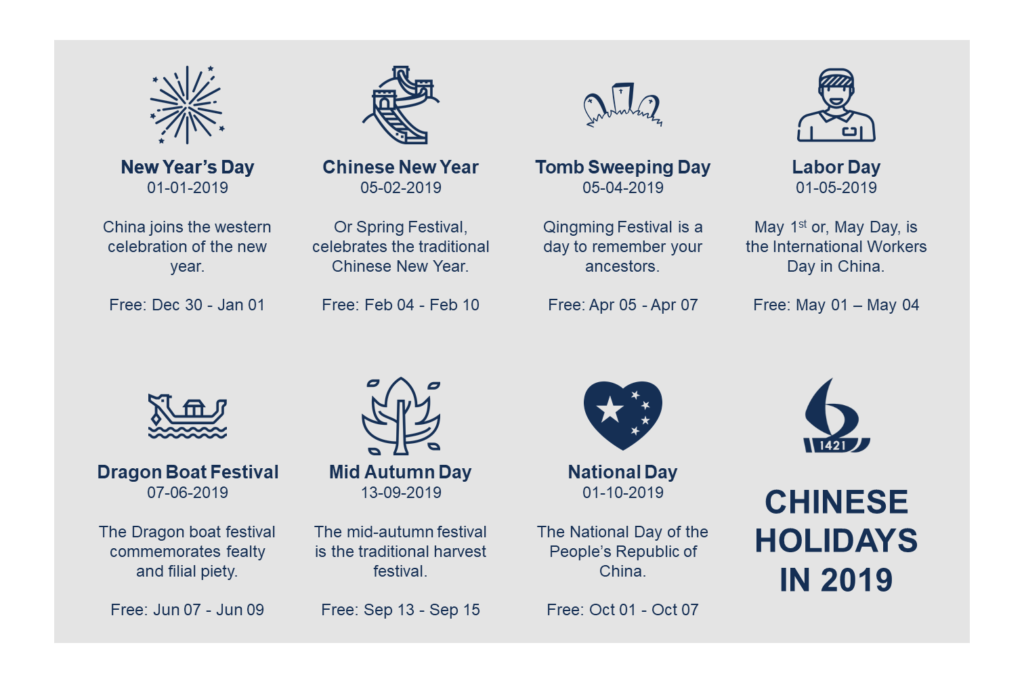 The first of the Chinese public holidays in 2019 is Chinese New Year. The Chinese New Year celebrates the new year on the traditional Chinese Calendar. It is often referred to as the “Spring Festival” and its date varies according to the lunar calendar. Every year it falls somewhere between January 21 and February 20. In 2019, the new year will start on the 5th of February. Furthermore, it is one of the Chinese golden weeks, which are full weeks off marked by a lot of travellers.

During Chinese New Year the Zodiac animal will switch from the dog to the pig. In Chinese culture, pigs are the symbol of fun, fortune and wealth. The  Chinese Zodiac calendar has 12 animals, so once every 12 years it is your animal’s turn. Moreover, the calendar has 5 nature elements, namely fire, wood, metal, earth, and water, thus once every 60 years the zodiac animal matches the element you were born under. Whenever this happens to someone there is a special celebration.

During the Spring Festival, people celebrate the last day of the year with their relatives. Similar to Western countries people would celebrate the new year with fireworks, however this is increasingly banned. During the first day of the New Year, people go to temple fairs in parks. For example, in Beijing, many people go to Ditan Park. Customarily, people give each other a ‘Hongbao’ or red envelop with a lucky amount of money. Interestingly, something you cannot do is sweep your home, since this means you will ‘sweep your luck away’.

The next of the Chinese public holidays in 2019 is the Qingming Festival. This is a holiday about remembering your ancestors. Chinese families often visit family tombs and clean them. Hence, it is also called ‘Tomb Sweeping Day’. Due to this reason, April 5, 2019 is a day off. It has been celebrated by Chinese for over 2500 years, but it only became an official day off from 2008 onwards. After the long winter, the spring is in full flair making people enjoying walking in parks and flying kites. Therefore, it is a unique combination between the sadness of remembering ancestors and enjoying spring.

May Day or Labor Day, 1st of May

As in many other countries, May 1th is Labor Day and consequently a day off in China. Labor day has been celebrated in China since 1950, and it has been a public holiday since 2000. Previously, the week of Labor day was one of the three Chinese golden weeks, however in 2007 the time off was reduced to only one day, in favor of adding the Qingming, Dragon Boat and Mid-Autumn Festivals as public holidays.

Update: On the 22nd of March the Chinese government announced that in 2019 the May Day holiday will be extended to a 4 day holiday. The holiday will start on the 1st of May until the 4th of May. To compensate the 28th of April, and the 5th of May will be working days.

The Dragon boat festival, which will be held on June 7 2019, is a spectacular sight in Southern China. During the festival Chinese Dragon boats race side by side and this is a spectacular sight to see. Rowing is especially popular in Jiangsu, Zhejiang, Guangdong & Fujian. The festival is celebrated on the 5th day of the 5th lunar month every year.

However, the day is not only about the rowing, it is also about eating ‘Zongzi’. These are sticky rice dumplings wrapped in bamboo leaves. Fillings on the inside differ per region; in Northern China they are often sweet as opposed to the savory ones in the South.

Like more lunar calendar events, Dragon Boat Festival is celebrated outside Mainland China as well. For example, in Singapore, Malaysia and Korea albeit under different names.

The Mid-Autumn Festival is the traditional harvest festival. It is celebrated on the 15th day of the 8th lunar month, which corresponds to September 13 in 2019. Furthermore, it is also known as the ‘Moon Festival’ due the full moon and the worshipping thereof. Specifically, it originates from Emperors worshipping the bright moon every year.

Traditionally people light and carry lanterns during the day, which makes for a festive sight. Moreover, people often give and eat mooncakes. A rich pastry filled with a variety of fillings such as salted duck egg yolks,  sweet bean pastes or even roses.

Nowadays, it is customary for businessmen and families to present mooncakes to their clients and/or relatives. This tradition has been picked up globally with for example luxury brands such as Louis Vuitton creating their own mooncakes.

The last of the Chinese public holidays in 2019 is the National Day of the People’s Republic of China. This day has been celebrated every year on October 1, since the founding of the PRC on October 1, 1949 on Tiananmen Square by Chairman Mao. It is also called ‘the National Day Golden Week’, similarly to the Spring Festival golden week.

The holiday starts with rising the flag at sunrise at Tiananmen Square. Although the flag rising ceremony happens every day, this day is obviously special. Many companies hang red lanterns to celebrate and there is a big China National Day Parade, broadcasted nationally.

2019 marks the 70th anniversary of the PRC, which means there will be a special celebration this year.

Maxime started working in China 6 years ago. Moving to China to finish his Master Degree, he quickly fell in love with Beijing and decided to stay in order to pursue a career related to China. Joining 1421 Consulting Group 4.5 years ago, he quickly became responsible for the inbound consulting projects and corporate services. Currently, he is General Manager of the group and working with the management team to further put 1421 on the map as a respected consultancy.