International Women’s Day (IWD) is celebrated on the 8th of March every year. On Women’s day the social, economic, cultural and political achievements of women throughout history are honored. However, in China, aside from celebrating the achievements of women, the day is also a day to celebrate women in general, and for men to show their love to the women in their lives.

Often on this day in China, women receive special treats such as enjoying a half-day off work, receiving gifts from their partners and family, or enjoying a day of shopping. Merchants across China have built on this day and market around the holiday with “empowering” terms, such as “Goddess Day” or “Queen’s Day”.

In light of Women’s day, this article takes a look at the Labor Participation of women in China. China has the highest women’s labor participation rate in the world. To honor and echo the true spirit of Women’s Day it will discuss how Chinese women have helped built the nation, and what the current situation is for working women in China.

The rising status of women in China has been present in China since the times of Mao, who famously said that “Women Hold Up Half the Sky” (妇女能顶半边天) in the 1950s. The meaning of the saying at that time was reflected in its emphasis on encouraging women to step out of their traditional roles and enter the political and public sphere to participate in socialist construction and the social revolution. Since then, Chinese women have been entering the labor market in record numbers, being lauded for their economic contributions. 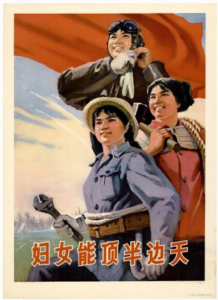 “Women Hold Up Half the Sky” poster

The development of women’s labor participation in China

Looking back at the past decades, the increasing labor participation rate of Chinese women is often related to specific historical events and social changes. Examples are the pursuit of industrialization and production efficiency during the Great Leap Forward period from the late 1950s to the early 1960s, or the need for (women’s) labor force to fulfill the labor shortage in China’s cities during the Cultural Revolution. However, after the end of both the Great Leap Forward and the Cultural Revolution, during times of surplus labor, women were encouraged to return to running the household.

People believe that the women’s liberation movement in the early years of the People’s Republic of China still has a profound impact on China today. This is especially apparent when looking at women’s labor participation in China compared to that of the rest of the world.

There are many possible explanations for the decline. It can be partially explained by the drop in birth rate and the increase of retirees. Furthermore, the current planned economy has less influence on the contemporary Chinese economy. Therefore, both men and women are able to choose different paths to realize their self-worth besides being employed.

Returning to work after maternity leave and leaving their children in the care of the older generation was a common practice for Chinese mothers. However, now China is faced with an aging population, Beijing changed its one-child-policy to allow all families to have two children. This led to more women with two children choosing to raise their children over pursuing a career.

Furthermore, female professionals on the mainland face more discrimination now, than they did in the past decades. Although, 30 Chinese provincial-level administrative regions have extended the statutory maternity leave for female workers , some women struggle to take full advantage of such benefits. With a survey conducted by Human Rights Watch in 2017, 75 percent of surveyed Chinese companies are more hesitant to hire women, given the cost of maternity leave. 33 percent of Chinese women surveyed said their salaries were reduced after giving birth. Moreover, some companies use quotas to determine when female employees are allowed to have a second child.

Apart from obstacles brought by the policy adjustment and company interests, on average, Chinese women earn about 30 percent less than men in similar jobs, compared with about 23 percent globally, according to a PWC report.

The role of enterprises in supporting women empowerment

As for enterprises, the lack of gender diversity and equality may act as a barrier to enhanced business performance. The research The Business Case for Change from the International Labor Organization in 2019 finds that:

A high women’s labor force participation rate does not mean China is ahead of the rest of the world on the road to gender equality and women’s autonomy. The lack of social security and external support compared with that of some developed countries needs to be taken into account as well.

As a people focused company, we trust every 1421 individual is a crucial component of our organization which needs constant nurturing and development, and we are always dedicated to empowering the women working at 1421 across every level and function.