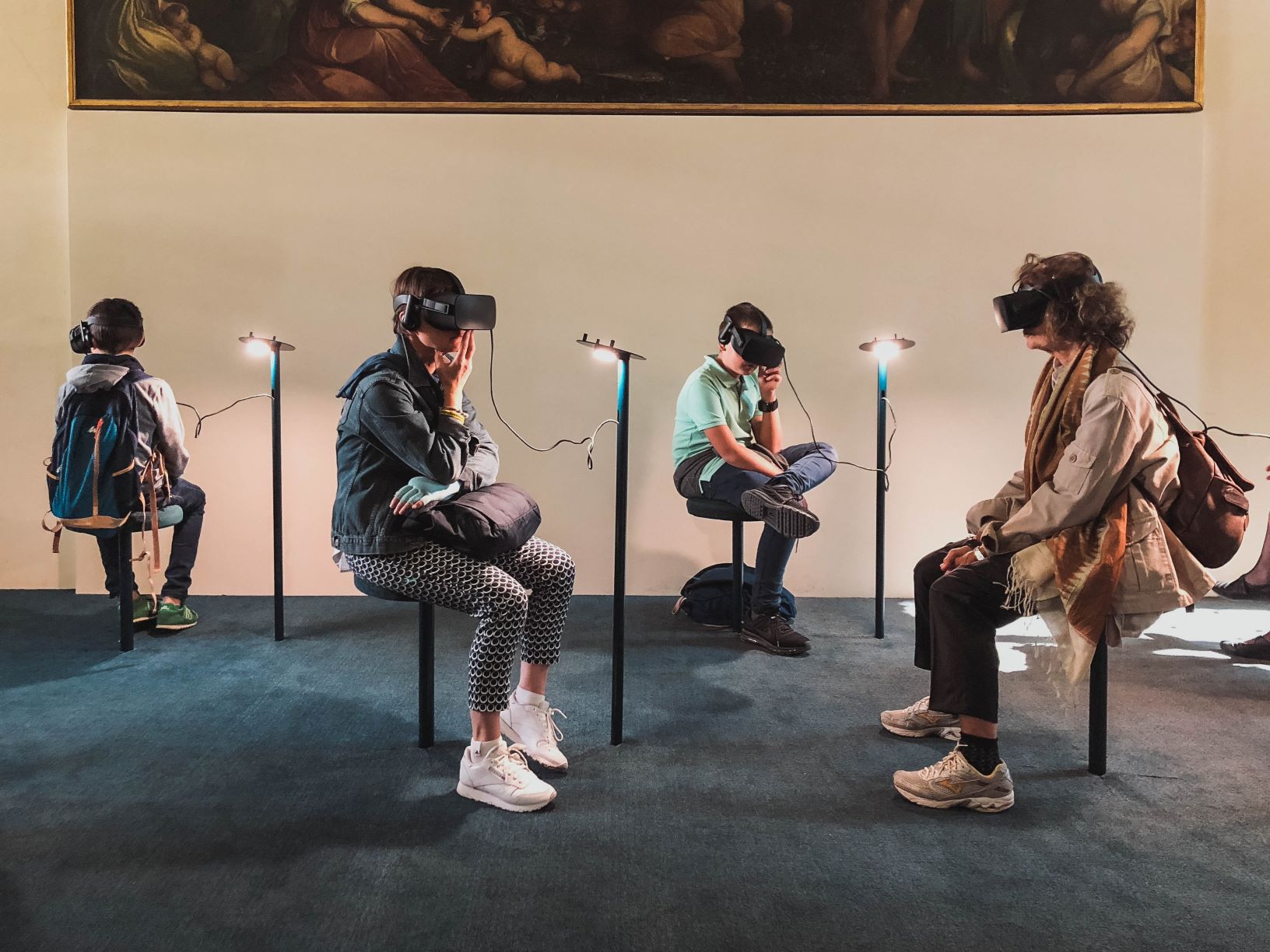 Virtual reality in China, and the entire world, did not experience the meteoric rise so many people predicted. It is not the way the majority, or even a significant minority consume media… yet. However, that is not stopping China from still taking a leading role in VR development on the global stage. China has the second most patents filed related to virtual reality technology so far. The country is only surpassed by the United States.

While commercial VR has been perpetually stuck in the “early adopter” phase of its marketing lifestyle since the 1980s, its rise into the mainstream is all but inevitable. It will probably not look the same as it looks today, with large headsets connected to PCs, however it’s next form is coming, and it will probably come from China. In fact, virtual reality in China is especially interesting, given the willingness of Chinese consumers to adopt to new technology as part of their life, a strong government push for domestic technology growth, and the upcoming 5G network.

The gaming industry in China is complicated due to the heavy regulations placed on it. While gaming counsels have made some recent strides into China, their impact is much smaller from the rest of the world due to them being banned in the previous decades. However, Chinese people still game, and it only served to shift the market away from platforms like PlayStation and Xbox and into PC gaming, and most of all mobile gaming.

The VR headsets are becoming smaller, cellphones more accessible, and affordable. The latest VR hardware techonlogies, such as the new Huawei VR glasses, are smaller and less intrusive. In the past the Oculus Rifts was the gold standard of VR, however times have changed. Mobile gaming is the key to the Chinese gaming market, and several Chinese game development companies are building “freemium” style VR games, which are hugely profitable.

Video game companies around the world have underinvested in VR, which is understandable given the industry’s arrested development. However, some games are still making strides in China. One of such games is Half-life: Alyx, which has recently launched and will probably drive many gamers to VR.

Corporate training is one of the must utilized commercial aspects of virtual reality in China. VR is used as a tool in safety training in coal mines, construction sites, petroleum refinement, and other essential and dangerous industries. Furthermore, KFC and Walmart use VR in their training, so it’s fairly across the board as far as industry adoption. According to Edgar Dale’s “cone of learning” theory, the human brain remembers 10% of what it reads, 20% of what it hears and 90% of what it does. VR is the closest you can get to “doing” without actually doing. By using VR trainees can learn to use dangerous or expensive equipment without any danger to themselves, others or the equipment itself.

Virtual Reality is becoming a staple for interior design, as well as industrial design. China’s largest aviation company, Commercial and Aviation Corp of China Ltd., worked with French VR giant Dessault Group to design China’s first commercial aircraft. VR is and will certainly be used in the factories and equipment of the future.

Real estate is one of the first industries in China to successfully use VR commercially. The Chinese real estate market has implemented VR to allow people view potential apartments from the comfort of their own homes or real estate office. Many companies, including Beike Zhaofang 贝壳找房 have been including virtual reality as part of their selection techniques. A virtual reality tour of an apartment allows you to visit the apartment and see the view from the window. Everything can be done, except walking around the neighborhood. It is a faster and more efficient method that will become more popular as VR is normalized. This method received an additional boost as a result of COVID-19.

Challenges to Virtual Reality in China

Government regulation towards virtual reality in China is mostly restrictive in terms of content, especially in gaming. However, the development of the technology itself is highly encouraged. Xi Jinping himself stated “…The new round of scientific and industrial revolution with Internet at its core is gathering momentum, and new technologies such as artificial intelligence and virtual reality are developing by leaps and bounds…”

There are incentives by the government to establish VR companies in China. The development of a healthy VR industry is in line with their goals of increasing the high-tech sector in China.

No video games (VR included) are allowed to have any blood or corpses in them, which means many of the popular VR videogames that already exist need to be redone just for the Chinese market. This causes additional costs for foreign VR game developers to enter the Chinese market.

According to Chinese law, nobody under the age of 18 may play games between 10PM and 8AM. Furthermore, people are limited to 90 minutes of gameplay a day on weekdays, and 3 hours a day on weekends and holidays. The actual ability to enforce this law in a closed shell system is difficult, however it is easier to enforce in online gaming. Online gaming in China is hugely popular, and you need to log in with you national ID to play.

Virtual reality in China does not receive any special treatment as far as the normal rules and regulations surrounding speech and publishing. The VR industry in China is even subject to some additional rules as well. After the development and popularization of “deep fakes” spread across international social media, the central government released new regulations starting January 1st, 2020 on VR, and all digitally altered media. This is as an attempt to stop whatever the government considers “fake news”. If you have seen a deep fake video before, you probably understand their concern.

Furthermore, another large restriction in terms of VR content is that much content is published on the Google Play store, which is banned in China. Therefore, all VR content has to either come from China, or from large companies that are approved in China. Because of the top down push from the central government for China to become a leader in VR, some speculate that VR content will have more leniency than other forms of media. However, this is unsubstantiated. Always follow regulations in China, and if you are not sure what applies to your company, consult with an expert.

Nanchang is also known as China’s virtual reality capital. Nanchang is home to the Honggutan New District, where over 100 of China’s VR companies are located. Global tech companies, such as Huawei, Alibaba, Microsoft, and HTC, all have VR development offices in this district. The annual output of the VR industry in Nanchang is over 5 billion USD, and is expected to rise to over 10 billion by 2023. Within the district is China’s first VR theme park, where visitors can experience various traditional theme park rides, such as a rollercoaster through VR and AR technology. Furthermore, there are also experiences solely made possible through VR. Lastly, Nanchang is home to the annual World Conference on VR, which attracts leading VR experts and company leaders from over 30 countries.

Fuzhou was one of the first cities in China to fully adopt a VR development strategy. Most VR developments in Fuzhou happen at the Binhai Digital Industrial Park. This Binhai Digital Industrial Park is home to NetDragon, a Chinese gaming company, which turned to interactive and VR augmented online education around 2010. NetDragon has a VR experience center, where Chinese consumers can come to and experience their latest developments in VR. Fuzhou is also home to pilot by China Mobile and Huawei to test a VR cloud service.

As the potential of remote working has been proven to be a viable strategy throughout the COVID-19 situation, virtual reality might be the next logical step in the process. Many multinational companies are either considering or testing VR as a new way for an even more interactive remote working experience. The Vive Ecosystem Conference (V2EC) which is hosted annually by Vive’s parent company HTC in Shenzhen, was completely in Virtual Reality this year due to COVID-19. This was by far the largest virtual reality conference ever held.

Was it perfect? No, people still looked like awkward half drawn 3D-animation cartoons. However, it was successful in several ways, and now that it is possible, more interactive than a zoom call, and constantly improving, it may change the way that international conferences are held. Are people going to still fly halfway around the world for a conference in the future when we now have other options?

Future of Virtual Reality in China

Currently, the core development of virtual reality in China is still focused on the gaming industry. However, we mentioned some promising examples of how VR technology can be and is used and integrated into other industries as well, and this trend will continue to grow in the future. The possibilities for VR adoption are endless, and the Chinese market shows a willingness to experiment, innovate and adopt. In the future, the wider availability of 5G enables VR to spread and possibly have more impact on VR capable devices. VR in education is the least expensive way for more hands-on learning, however the future is uncertain. The possibilities for media, gaming, the impact on how we conduct business and communicate are endless but uncertain. What is certain is that China will play a leading role, continuing the be the largest manufacturer of devices and soon the largest creators of content.