To stimulate certain areas and industries, the Chinese government has often engaged in economic policy experimentation in order to promote rapid economic development through the loosening of restrictions, favorable import and export policies and tax incentives for firms. While China has seen many iterations of these types of policies and plans, the Free Trade Zones have attracted the most attention and investment in previous years.

Free Trade Zones (FTZs) are a specific type of special economic zone (SEZ) where goods can be imported, handled, manufactured, and exported without direct intervention from Customs.  Currently, there are 11 FTZs across China that provide their own special benefits and have different industry focus areas that are highlighted in our graphic.

The current FTZs in China are: 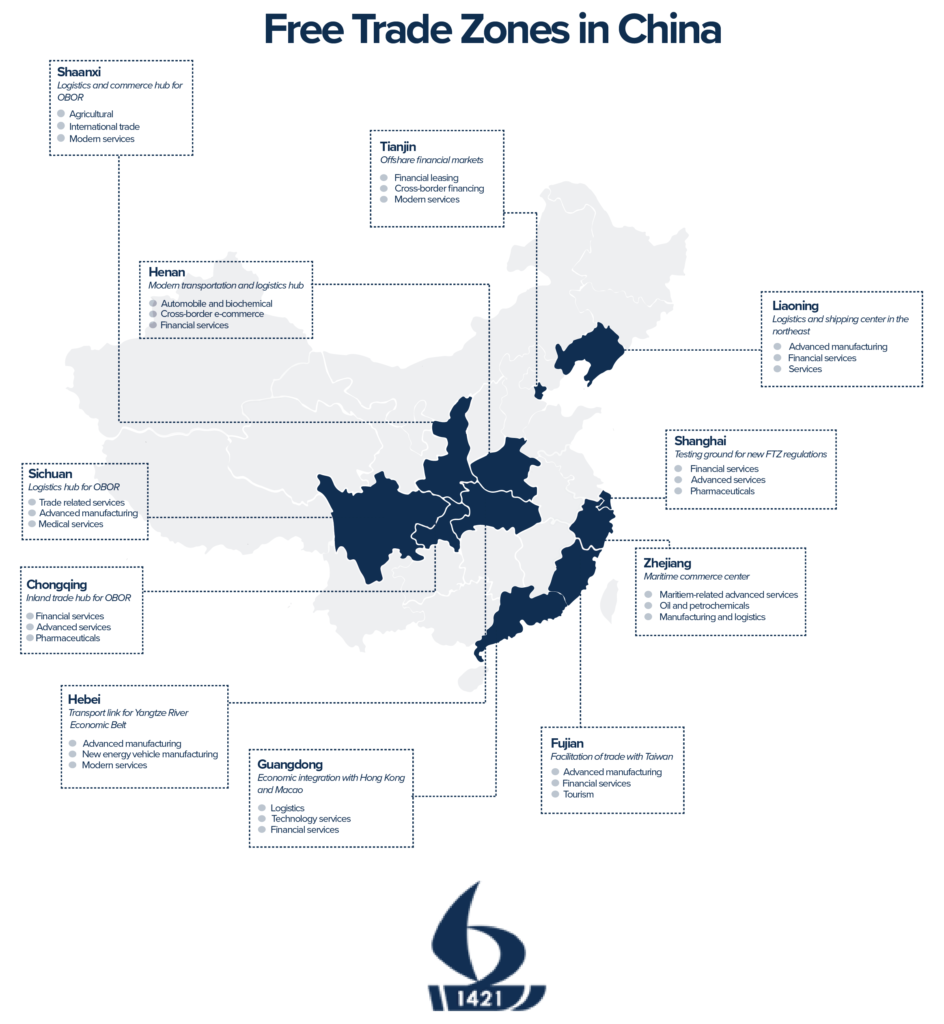 While FTZ benefits may be attractive to foreign companies looking to invest in and set-up their business in China, it is important to evaluate which one is right for you. To do so, businesses should look at how your business goals align with the industries being promoted, the strategic location of the FTZ and if it matches the needs of your company, and the process for applying to be a firm recognized as contributing to the FTZ mission. Through this article, we hope to provide you with the insight necessary to gauge whether the Free Trade Zones can benefit your business in China.

The first Free Trade Zone in China was launched in 2013 in Shanghai. Shanghai seemed the most obvious choice to pilot a Free Trade Zone as it was a historically international city, positioned strategically on the Yangtze River Delta. Its location provides a convenient port for trade, and significantly more developed economically than many other major cities.

The Shanghai FTZ was founded with four clear goals in mind:

Shanghai’s FTZ became the example case for FTZ’s across China and proved that the policy could be successfully implemented. Once implemented, the Shanghai FTZ saw many new practices take hole such as the relaxing incorporation requirements, adopting the use of the Negative List for pre-approval procedures, and implementing a one-stop application process. These measures streamlined the process of doing business in China and eventually would be adopted nationwide.

After the success of the Shanghai FTZ experiment, the government announced the plan to open three more FTZs in 2015 in Fujian province, Guangdong province, and Tianjin municipality. The choice of these three locations for the secondary experiment of FTZ policies was largely due to their position in supporting different aspects of China’s economic development. Fujian province largely supports China’s trade with Taiwan. Guangdong province supports the economic integration and transit with Hong Kong and Macao. Tianjin municipality supports the northeastern region and helps develop the offshore financial markets in East Asia. These FTZs had slightly different goals than the original goals of the Shanghai FTZ, but all proved successful and further cemented the FTZ policy as a model that could be applied in other regions of China.

By the year 2016, the Chinese government announced the plans for seven additional FTZs in coordination with their Belt and Road Initiative (formerly “One Belt, One Road”) that seeks to revitalize the economic and cultural ties between Western China, Central, and Southeastern Asia. These most recent FTZ additions are in Chongqing, Liaoning, Henan, Hubei, Shaanxi, Sichuan, and Zhejiang.

There are some key incentives offered to companies participating in the Free Trade Zones of their region. In this section, we will outline some of these incentives.

As FTZs are more for policy piloting than for tax-cuts, many do not actually have favorable tax laws for companies registered as a part of the FTZ. While some FTZ’s do incorporate tax incentives, it does not feature as widely as might be expected. Some FTZs have started to experiment with this. In the Shanghai FTZ for instance, an FTZ-registered company can pay their Corporate Income Tax (CIT) in installments over a five-year period.

Furthermore, some FTZs offer a reduced corporate income tax (CIT) of 15% if the firm fulfils certain requirements. Areas currently offering this discounted CIT are Hengqing New Area in Guangdong FTZ, Qianhai Shenzhen-Hong Kong Modern Service Industry Cooperation Zone (Qianhai Shenzhen- Hong Kong Zone) in Guangdong FTZ, and Pingtan Comprehensive Experimental Area in Fujian FTZ. It is worth noting that all companies pursuing this discounted tax rate must apply for it after being approved as a registered FTZ company. The discounts are offered on a case-by-case basis.

The process for customs clearance features largely in most FTZs in China. By and large, the process is relatively streamlined particularly in regard to the clearance declarations and payments made by companies. Firms within an FTZ can declare groups of goods for export and import on a single form and make a collective declaration which reduced the time and overall cost of the procedure.

Furthermore, if the firm has provided adequate guarantees, it is able to pay tax in a one-off lump sum payment within a specified period for goods that have already been imported. Customs can then follow up for tax audits.

Some FTZ have varying rules and privileges given to FTZ companies in the import and export processes. In the Shanghai FTZ for example, the border clearance can be done on a monthly or quarterly basis with all waybills. Goods shipped to the FTZ can be directly sent to the warehouse without having to first clear customs. Previously, shipments may have had to wait a few weeks before being sent to the warehouse. When being shipped outside of the FTZ, the goods must clear customs, but the clearance time has been decreased to about two to three days.

Establishing a company in a Chinese FTZ can be very benificial for a Cross-Border E-commerce strategy. Read more about this in our article.

Some companies find it is beneficial to their supply chain to be located within an FTZ due to the number of existing companies and the developed infrastructure surrounding import/export and general transit of goods.

Furthermore, many FTZs also serve as international ports of entry which can lower costs of shipping and transportation costs in country. This streamlined supply chain is what attracts many companies to set-up their China headquarters within free trade zones. In a plan released by the government in 2017, the goal of a “single window” trade center was declared for China’s FTZs. A single window system would further streamline the process and ease costs and requirements for import and export within the area.

As part of the policy piloting, FTZs often have liberalized policy for Foreign Invested Enterprises (FIEs) in specific industries or industries with capabilities that are not yet developed throughout China. These often address areas where Chinese interests are protected throughout the mainland and provide foreign firms a loophole to the existing legislation if they are an FTZ company or engaging in trade through an FTZ.

An example of these liberalization can be found when looking at the Shanghai FTZ. While previously, shipping between domestic ports had to be done with Chinese-owned ships, the Shanghai FTZ allows for shipping between their international entry port and other domestic ports on internationally owned vessels as well. This can cut the costs and necessary partners involved in the import of goods or parts through Shanghai.

Free Trade Zones can offer companies a great destination to kickstart their business in China due to the centralized supply chain hubs, the favorable industry-specific liberalizations, and also the ease of import-export due to preferential policies in the FTZ. If your company thinks they might be engaged in business that could benefit from the policy piloting of an FTZ in China, it might be worth evaluating if your company could present a strong application in order to be considered for an FTZ.

If you have questions about the FTZ application process or how to set up your business for success in China, feel free to contact us. Our team of business and financial experts is happy to assess your request and advise you on opportunities for your business in mainland China.