Since the economic reforms introduced in 1978, the Chinese economy has shown an impressive rate of growth. After Deng Xiaoping replaced Mao Zedong as the paramount leader, he broke with communist and socialist principles and enacted policies that meant certain people and regions would become prosperous before others. China’s coastal areas, where various Chinese Tier 2 cities are located, have benefited from these policies, and since 1978 coastal cities have become better educated and had better infrastructure (facilities) and more fertile land.

China has introduced several national projects like the “Rise of Central China” and the “Go-West Strategy” since 2000. These strategies were designed to accelerate economic growth in western and central China. They focus on infrastructure of development, ecological protection, the promotion of education and eliminating the loss of human capital to other provinces. By concentrating on these goals, the government hoped to set up a sustainable growth in western China that would decrease the economic gap between East and West China. These investments improved the accessibility and security of investments in China, which also gave the region the chance to grow.

Due to increased interest from the West in Chinese Tier 2 cities, 1421 put together an analysis of 6 well-known Chinese Tier 2 cities, namely: Tianjin, Suzhou, Hangzhou, Chengdu, Wuhan and Chongqing. These cities have undergone rapid development. In the first half of this series, we looked at Suzhou, Hangzhou and Tianjin. In this article, we look at Chengdu, Wuhan and Chongqing. These cities have been flourishing due to the reforms mentioned above, and have attracted many (foreign) companies. The growth of these cities has been impressive; within the span of 20 years they have transformed from underdeveloped, poor regions to some of China’s largest and most modern cities complete with advanced industries in various fields.

Since the introduction of the “Go-West Strategy”, Chengdu has developed into a major national city with many advanced industries. However, Chengdu’s ambitions for expansion and growth are far from complete, and the city has announced various policies and urban development plans expected to further develop the economy.

The economic growth of Chengdu reflects the success of this strategy. From 2014 to 2016, Chengdu’s GDP grew by $20bn, making the total GDP $184,99bn. 2016 was an important year for Chengdu not only due to its GDP increase, but because in this year Chengdu was promoted to a national central city, giving it more authority in regional policies. Although its growth is impressive compared to that of western cities, Chengdu is currently not outperforming other Chinese Tier 2 cities.

The “Go-West Strategy” has attracted many foreign businesses and institutions to Chengdu. In 2016, Chengdu received $7,52bn of foreign direct investments, most of which was used for the wholesale, retail, and commercial/lease service sectors. Due to this investment Chengdu is home to some of the highest numbers of luxury brands, grade A office stocks and internationally-branded 4 and 5-star hotels of all the Tier 2 cities.  Furthermore, Chengdu is home to the highest number of consulates and international trade institutions of all the Tier 2 cities, demonstrating the city’s international appeal.

The IT-sector is one of the best performing industries of Chengdu, and has been growing massively since the introduction of Intel in 2004.  Since 2005, the industry has been growing with an annual rate of 20% and has attracted some of the biggest IT companies in the world, including Foxconn, Dell and Lenovo. In just the first 7 months of 2017, the IT sector in Chengdu generated an output value of $19,66bn.

To ensure sustainable growth and to speed up development, the city government has announced the development of a new economic zone, the Tianfu New area. The development zone covers an area of 1578 km2, and since 2014 is officially a state-level new area.  The aim is the transformation of the Tianfu New District into a modern residential commercial city by 2030. Chengdu is convinced that 6 new industries are necessary to make this project a success: information networks, biomedicine, commercialisation of scientific breakthroughs, civil-military integration, international co-operation, and creative design. 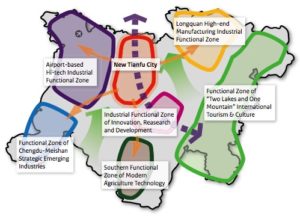 “The Belt and Road Initiative” is a strategy the Chinese government created to improve Chinese connectivity with the rest of the world. China is investing worldwide to improve infrastructure from China to Europe, Africa and the rest of Asia. Chengdu has cemented its position as a key city in the “Belt and Road Initiative,” as the city accounts for 26% of the railway traffic between Europe and China. Beyond the city’s excellent railway infrastructure, it also possesses a solid airway infrastructure. Chengdu Suangliu International Airport is the fourth busiest airport in mainland China, servicing over 42 million passengers a year. Chengdu is also constructing a new airport, Chengdu Tianfu International Airport. With the completion of this airport, Chengdu will be the first Chinese city after Shanghai and Beijing to have a second commercial airport.

With a history of over 3.500 years, Wuhan is one of the oldest and most civilized of the Chinese Tier 2 cities and of China in general. Throughout history Wuhan has taken advantage of the opportunities resulting from its location at the intersection of the Yangtze and Han rivers. Now, Wuhan is experiencing rapid growth due not only to this intersection, but also to its central position in China. Wuhan is located within a 2 hour flying distance of Beijing, Shanghai, Shenzhen and Chengdu, making Wuhan the true center point of China. 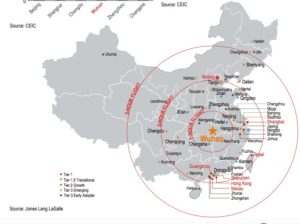 In 2016, the Chinese government announced that Wuhan would be transformed to a national central city. This has increased its sphere of influence on surrounding cities in modernization and integration in fields such as infrastructure, finance, public education, social welfare, sanitation, business licensing and urban planning. This extra influence has boosted the development of the 8+1 city cluster. Upon completion, this city cluster will be home to more than 31 million people.

Wuhan has made optimal use of its central position to become the largest air, water and land transportation hub in central China. Wuhan’s central position has led it to be nicknamed “gateway to nine provinces.”This function as a main transportation hub has provided a lot of opportunities to the city and to its businesses. For example, Wuhan’s GDP grew by $59bn between 2012 and 2016, to a total of $186bn in 2016.

Wuhan’s strategic position and economic strength has attracted many foreign investors over the years. Wuhan is specifically popular with French companies; more than ¼ of French investment in China are in Wuhan. In 2015, foreign direct investments in Wuhan totalled $5,991bn, and France, Korea, the United States and the United Kingdom have even set up their consulates in Wuhan.

The GDP of Wuhan is divided almost evenly between the industrial (45,60%) sector and the service sector. The government of Wuhan is actively trying to attract new industries and to develop existing industries through certain preferential policies. For example, Wuhan is attempting to become the biggest vehicle producing city in China, and multiple car brands such as General Motors and Honda have set up production centers in Wuhan. Renault opened a new plant in 2016, and Honda is expected to open a new factory in 2019.

Wuhan is not only trying to attract companies by providing them with preferential policies. Wuhan has set up certain programs to attract talents for its main industries; opto-electronics information, bioscience, environment, high-end equipment and high-tech services.

Wuhan is one of the most important inland river ports in China, while also enjoying well-established air and land transportation networks. Furthermore, Wuhan Tianhe International Airport offers regular domestic and international flights to connect Wuhan with other major cities in the world. The China-Europe direct freight train links Wuhan with Mělník and Pardubice in Czech Republic. Wuhan consistently leverages its position in central China, because of this the amount of international flights directly to Wuhan is steadily growing. Wuhan’s geographical position also lends it a lot of opportunities in China itself, as the city is in the middle of the trade routes from North-to-South China and from West-to-East China.

Chongqing is one of four municipalities directly under the control of the central government. Chongqing is no ordinary city; the city has an area 82,403 km2, almost the same as that of Portugal, and is home to more than 30 million people. Chongqing is also called the city of mountains, as 70% of the city is built on mountains.

Chongqing became a municipality in 1997 to speed up the construction of the Three Gorges Dam, the world’s largest hydropower project. The establishment of the Chongqing municipality represented a breakthrough in China’s initiatives to speed up economic development in its central and western regions. The Three Gorges Project has had positive effects in areas such as tourism, relocation of residents and environment protection, and has stimulated the development of Chongqing’s economy.

Chongqing is dominated by heavy industry, which accounted for 72.4% in its total industry. The goods that are most manufactured in Chongqing are motor vehicles (21,5%) and communication and electronic equipment (15,5%). Chongqing is trying to upgrade its economy from the heavy industry, to more advanced industries. The State Council Information Office and the China International Publishing Group published a document containing the preferred industries for Chongqing.

After the completion of the Three Gorges Dam, the Yangtze river became much more important for Chongqing, as it was now open to larger ships. This turned Chongqing into one of China’s most important inland river ports.

Though Chongqing is is currently a major freight destination, it is trying to expand its railway network. As a result of the relocation and construction of factories in Chongqing, the city has seen a huge increase in rail traffic, leading to a need for continual infrastructure improvements. In 2017, the China State Council approved the establishment of a new free trade zone in Chongqing. This new free trade zone is aimed specifically at promoting the Belt and Road Initiative. The zone is set to host companies related to the development of the Chongqing-Xinjiang-Europe rail line.

In August 2017, Chongqing Airport opened its newest terminal, Terminal 3. This  new terminal will now handle all its international routes. Its construction greatly increased the capacity of the airport and attracted many new routes. Between 2017 and 2020 the airport plans to introduce 20 new international destinations, 12 of which will be western destinations.

China has shown tremendous growth in the previous decades, and the country is becoming more and more developed. With this development, western companies now have more options than just the big “Tier 1” cities. The Chinese Tier 2 cities have demonstrated that they can also serve as gateways to China, offering plenty of opportunities to western companies.

Chengdu, Wuhan and Chongqing each have their own policies and ways to attract foreign attention and investment. Chengdu has been growing rapidly and is likely to sustain this growth for the near future. Wuhan has seen a surge in foreign activities for the last decade. And finally, Chongqing, although currently the least well known of the Chinese Tier 2 cities, has shown significant promise as the fastest growing city in China.